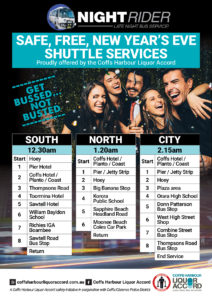 The Multi Venue Barring Documents are now available on our website.   View the MVB douments here

GOING DOWN: Alcohol-related violence at establishments in Coffs Harbour has declined.

Alcohol-related assaults have continued to decline in Coffs Harbour following the NSW wide trend outside of Sydney, since the introduction of the lockout laws.

Plantation Hotel general manager Daniel Knox experienced a huge reduction in the number of assaults at his venue over the past year.

The previously listed Level 1 venue, which recorded the highest number of incidents in NSW over July 2014 – June 2015, has since been removed from the list following the voluntary closure of its nightclub last August.

“We were number one in the state then 12 months later were off the list,” Mr Knox said.

He said there was now a focus on remodelling the business to become more family friendly.

“It’s changed the nature of the business,” he said.

“We’re definitely running on the right side of the law.

Coffs Harbour liquor accord president John Rafferty said the number of incidents relating to alcohol violence had gradually decreased since the lockout laws were put in place in 2014.

He said there was currently no intention to alter the current drinking regulations in Coffs Harbour.

According to the latest study by the NSW Bureau of Crime Statistics and Research, the number of non-domestic assaults declined across NSW outside of Sydney at a gradual rate.

But the number of assaults increased at Kings Cross and in the Sydney CBD’s lockout precincts.

The analysis of the report covered 61 months before and 32 months after the lockout laws came into effect.

In areas outside of Kings Cross and the Sydney CBD – Pyrmont, Ultimo, Chippendale, Surry Hills, Potts Point and Rushcutters Bay – assaults initially decreased but have since increased by 11.8%.

Assaults in four other popular night spots within easy access of the Kings Cross and CBD entertainment districts – Newtown, Coogee, Bondi and Double Bay – also recorded a increase by 16.7%.

Director of BOSCAR, Dr Don Weatherburn, said the figures showed the effects of the lockout laws had not yet fully played out.